You can find all the good stuff at https://github.com/roseeng/piClock

OK, I have never before experienced that I buy something from a company, have a diskussion with the company about a missing feature, and the company rsponds by describing how to solder a cable into the circuit board to create that feature yourself…

But that is exactly what happened. I backed the kickstarter project HDMIpi, because I liked the idea of an affordable screen to the affordable Raspberry Pi computer. I had an idea to use it as a wall clock, since the pi fits so nicely on the back of the screen, just like a digital photo frame.

But then I realized that it would be on 24 hours a day, 7 days a week, and it felt a bit wasteful. After all, the Pi could almost be powered from a battery, but with the backlight on, the screen consumes 8W. So I started investigating ways of turning it off.

The Pi supports CEC, which is a standard of communicating over the HDMI cable. The device can pass on IR commands to the computer, and the computer can control the device. But the HDMIpi does not listen, at the moment. I also tried tvservice, that can turn the hdmi power on and off, but the only thing that happens if I turn the hdmi off, is that the screen complains about the missing signal.

So I went to Twitter and asked Alex Eames, one of the guys that created the HDMIpi about it. He told me that my findings unfortunately were correct, but that perhaps there might be a way of hacking it. 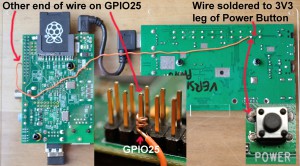 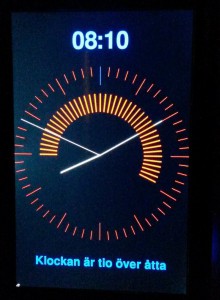 Have you got children?

Have you tried getting them to school in time in the mornings?

Have you had to go to work before the kids went to school, and worried all the way to work, wether they would get there in time or not?